Cocoon is the selected entry from the University of Manitoba to The Forks North Portage Corporation's annual Warming Hut Competition.

The project is being designed and built by Professor Lancelot Coar and a group of students from the university.

The warming huts will be built on the Assiniboine River, along the banks of The Forks in Winnipeg Manitoba, Canada.

from the original competition entry:

"The extreme Manitoba climate makes the Winnipeg
Warming Hut Exposition possible. At the same time this
unique weather offers us an opportunity to produce a truly
site-/climate-specific architecture to celebrate the river walk
experience. Professor Lancelot Coar working with students
from the Faculty of Architecture at the University
of Manitoba will attempt to do this by constructing an
ephemeral refuge made primarily from the elements of the
river walk itself. By first setting up a lightweight compressive Fiberglass
framing system, this warming hut will be skinned with a
flexible fabric membrane that will cover the structure. After
drilling a hole into the ice, the river water will be pumped
out and sprayed onto the skin, freezing it and creating a
stiffened body on the skeleton it covers. The fabric will
become a firm, translucent shell that will illuminate the
space within and offer protection from the snow and wind.

Throughout its life, the semi-transparent thin-shelled
structure will become a venue for various arts programming
that will engage visitors to the hut during the day and at
night. In conjunction with several artists from Winnipeg,
the hut will offer a temporary site for performances by
storytellers, a short film series projected on the structure itself."

The Bulletin / Globe and Mail Article

Last week the warming hut was featured in both The Bulletin ( a University of Manitoba publication) and in The Globe and Mail. 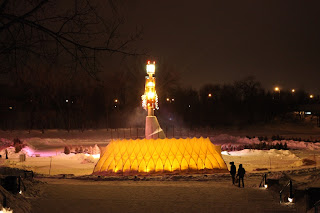 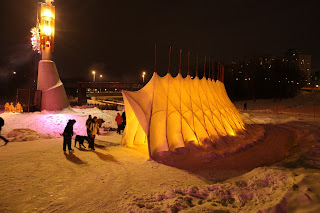 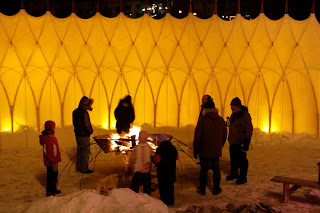 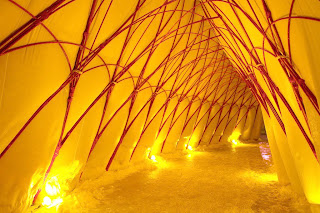 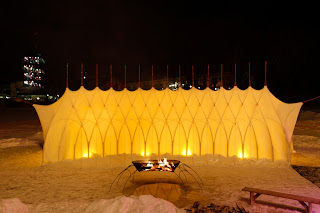 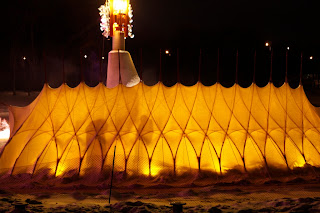 Last week the firepit, designed and built by Sean Sinclare, was installed in the 'nook' of the warming hut. Due to the warm weather, the structure will be coming down this weekend.
Posted by coc00n at 6:35 PM 0 comments

Sorry for not keeping up to date, it's been a busy week.

The hut was erected last weekend on site at The Forks. Throughout the week it has received several coats of water, which have now frozen into ice.


The fibre glass pieces and the rest of the components were transported to the site on Saturday morning. After moving the components to the ice, the structural bays were put in place.

At first, we attempted to lay the entire structure flat, clamp each connection, and then raise the pieces to stand upright. However, due to the lack of friction on the ice, it was too difficult to adjust the structure correctly before clamping it in place. Instead, we opted to construct the hut as we had originally tested outside on numerous occasions.

Once the structure was in place, the fabric had to be threaded through the tips. This was quite the experience! By flattening the structure we were able to bend it horizontally, enough to fit the fabric over the tips. Then, starting at one end, the fibreglass bays were returned their positions and re-attached to the rebar.

After a week of watering the building, the Cocoon team is excited for the opening this weekend!
with text from Kailey Kroeker


Over the weekend, the proposed foundation, 1" steel rebar embedded into the ice, was tested. 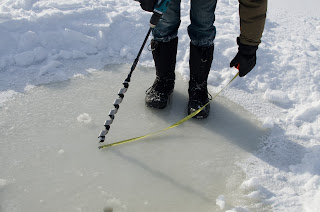 A hole was drilled at 60°  (equal to the angle of the base of the fibreglass structure) 14" into the ice. The water on the ice is from a hole previously drilled, to find out the depth of the ice (16"). 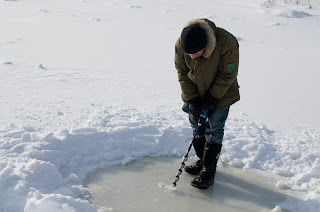 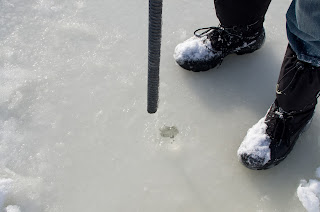 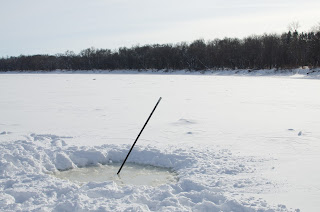 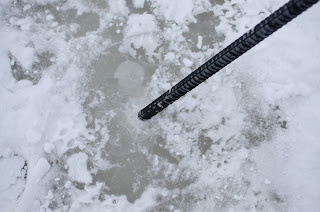 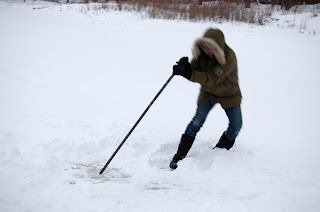 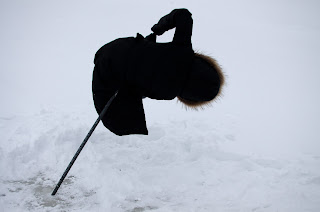 As a result of this testing, when the warming hut is built (next week!) the steel will be placed into the ice at around 70° - 80°. This will allow the foundation to open up the base of the structure slightly.
Posted by coc00n at 11:55 AM 0 comments

Together with engineers Dr. Dagmar Svecova and Payam Nabipay, the Cocoon team completed some exciting tests of the rebar at the Civil Engineering and structures lab yesterday.

We tested the strain on the bars given several dimensions of bending diameter/radius.
We used strain gagues to test this at the top of the bar.  The test was to see if the current bending that we are using on the structure (aprox. 2.2m in diameter or 1.1m in radius) is within 25% of the allowable strength (building/design code).  It was very exciting to discover that our current bending only puts about 19% stress on the bars!  In fact from the pictures you can see that the bending that we were able to test to was about a 1.2 m diameter or .75m radius which only caused the material to stress to about 22%-25% allowable stress.
Anyway, this is very good news and we are continuing to modify and advance the design and fabrication of the material, and we are discovering that our intuition and design method is within the range of conventional design loads on the rebar.